STRESS, by request, will survey and analyse the site for the composition of the soil below the foundations. For the ReFORCE system to work effectively non- cohesive soil; silts, sands and gravels are required. Clay cannot be permeated by resins. (The presence of some clay need not rule out the use of ReFORCE piles but the distribution and position of any clays matter.)

The design of ReFORCE piles is based on established soil mechanics expressions. Using data from the enquiry information the mass of the structure can be gauged. The construction and type of foundation as well as the shape of the building are taken into account and the strength of the foundation soil also factored in.

Our design team then produce a scheme showing the positions, depth and target diameter of each pile.The bearing capacity is also calculated. ReFORCE piles are typically 500mm or more in diameter and placed as close as practicable to the centreline of the structure, the exceptional diameter of the piles and careful positioning avoid the risk of accentricity of support.

Once the bespoke solution to the specific issue has been identified by the team of engineers, STRESS mobilises on site and starts by drilling small diameter pilot holes for the lance into the slab and substrate. The lances are then driven into the substrate and maintain intimate contact with the soil, designed as such to ensure resin does not escape to the surface during pumping.

Once the lance has been driven into the substrate, the process of forming the pile can commence where the resin is pumped down the tube and into the foundation soil. Injection is at low pressure and is sustained over a moderate period.

The dosing of the resin is controlled by moving the axial delivery tube through the centre of the perforated lance. The amount of product introduced is measured prior to installation. With reference to the geotechnical survey, the quantity of polyurethane grout introduced will indicate the final diameter of the grouted column in any given location.

Newtonian grouts (being free of particles) are able to penetrate fine soils such as silts and fine sand, peat and any non-cohesive ground.

The geotechnical grade polyurethane resin used in ReFORCE Permeation Systems undergoes a reaction in contact with pore moisture within the soil. This causes the formation of CO2 micro bubbles. This expansion phase differs from the injection phase in that it acts to enhance permeation by further reducing viscosity and mobilise the grout. The expansion phase is the principal reason why such large diameter piles can be formed.

Such expansion is carried out slowly and under low pressure for up to thirty minutes after initial injection. The pattern of expansion being multi-axial is to even out the profile of the pile column thus eliminating the formation of excessive ‘waists’ and ‘fins’.

Evidence from excavated test piles and laboratory permeation tests indicate that variation in permeability with soil classification is predictable. 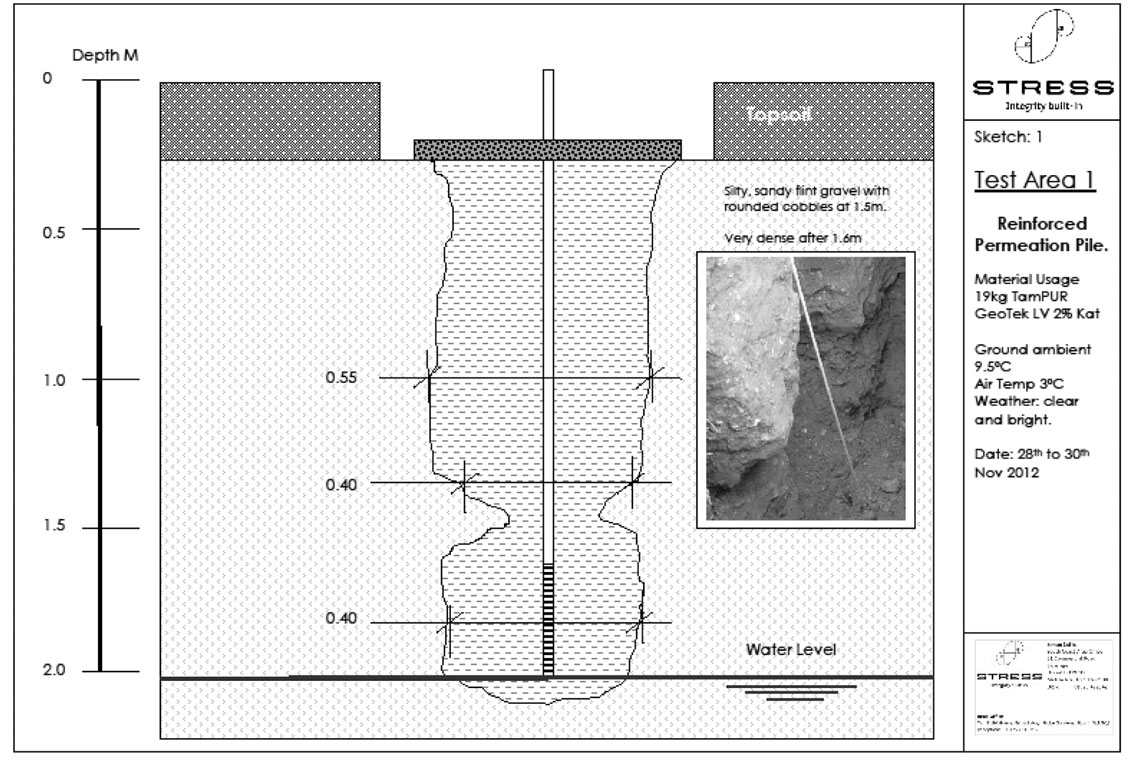 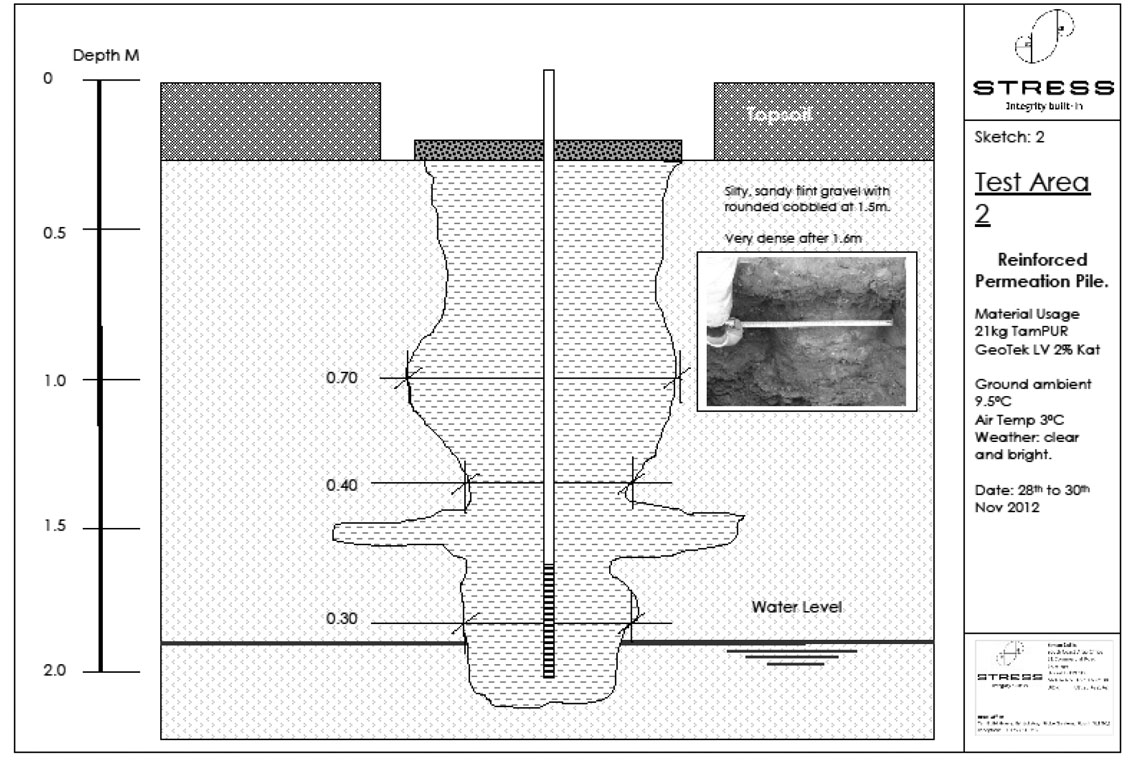 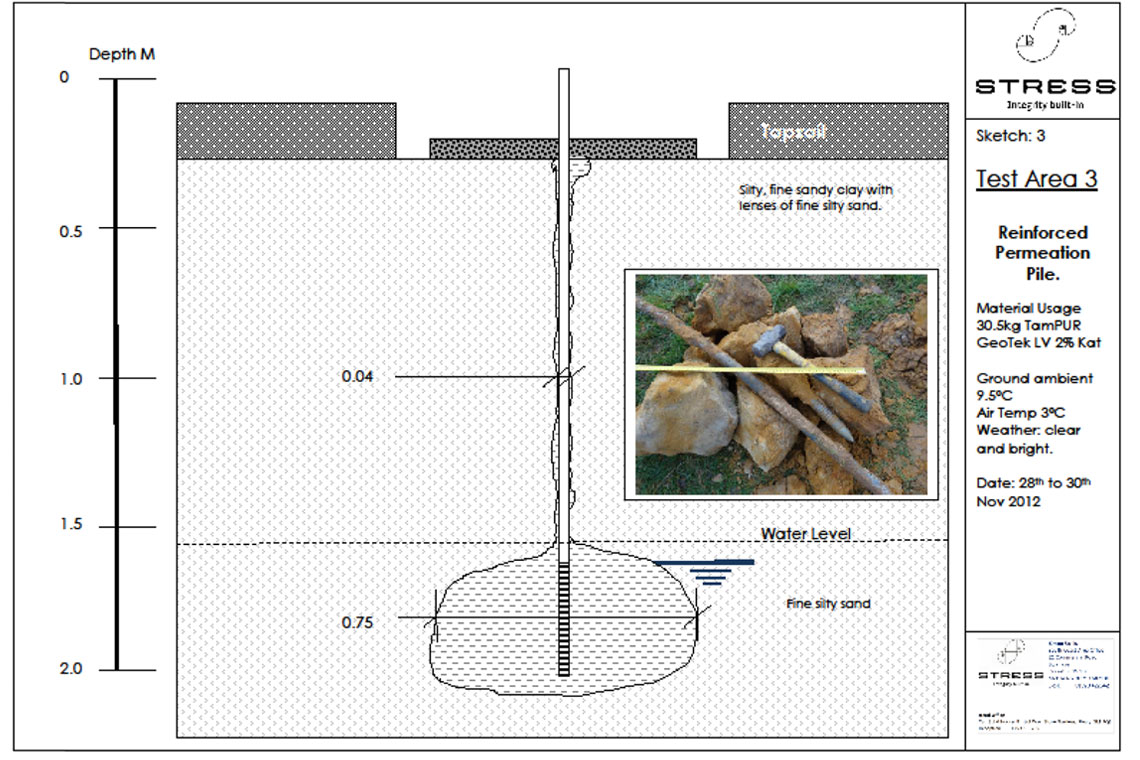 On 29th November 2012 GeoInnovations in partnership with STRESS UK’s Foundation Rescue division undertook three test pile scenarios to evaluate the performance of the permeation piling systems in varying substrates.
All test scenarios were to 2m depth. Test scenarios 1 and 2 were undertaken in silty, sandy gravel. Test scenario 3 was undertaken in sandy clay.

Tests 1 and 2 were only injected with approximately only 10kg of Geokat LV resin. (the normal dose rate is 20kg per meter or refusal). The average diameter of the pile from test scenarios 1 and 2 was circa 500mm, in line with predictions. The resultant cured mass was of excellent strength. This proves that a more conservative estimate for resin volumes was required and has since been applied.

The material which forms the bulk of the piles is, by its nature, variable in composition. As long as non-cohesive soil is used to form the piles, greatly enhanced, predictable masses are formed. Test 3 was in cohesive soil, as such there was no expectation to be able to form a pile.


During injection, 30kg of resin had been placed before seepage occurred at the surface. The resin had actually formed a bulbous mass 750mm in diameter at a point 1.6 meters deep in silty sand. Then extracted mass was found to be extremely hard and the lance had to be mechanically in order to extract the remained of the lance. 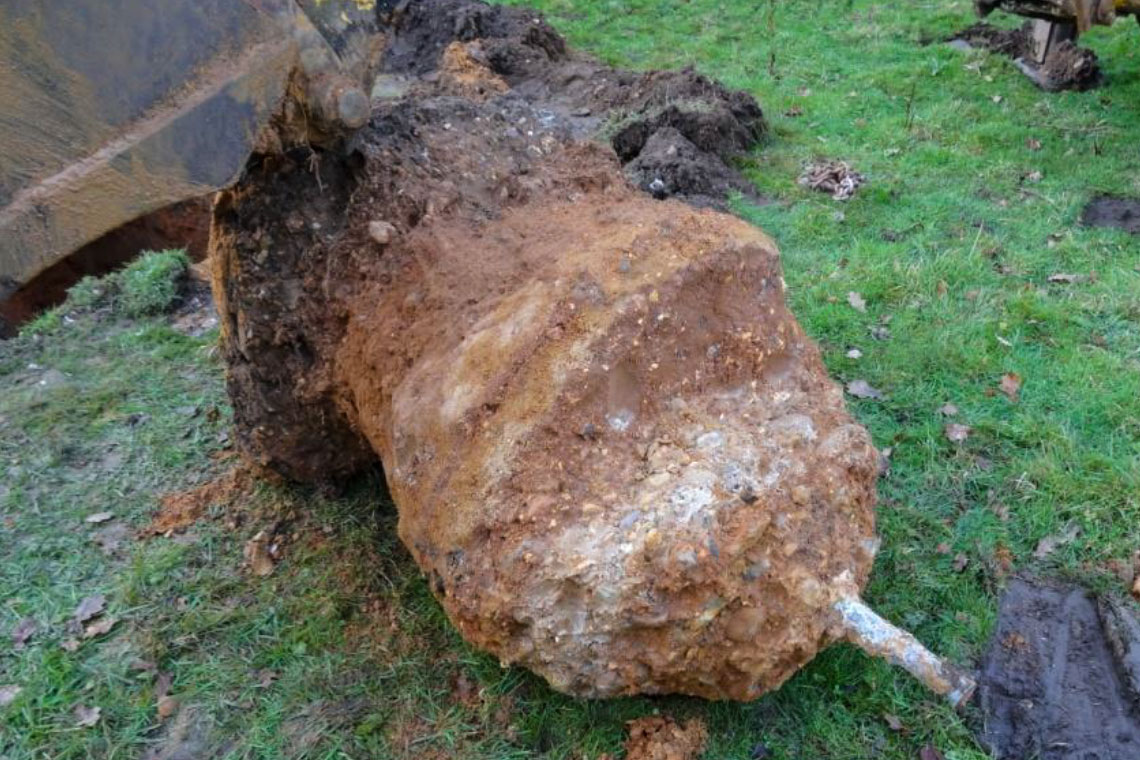 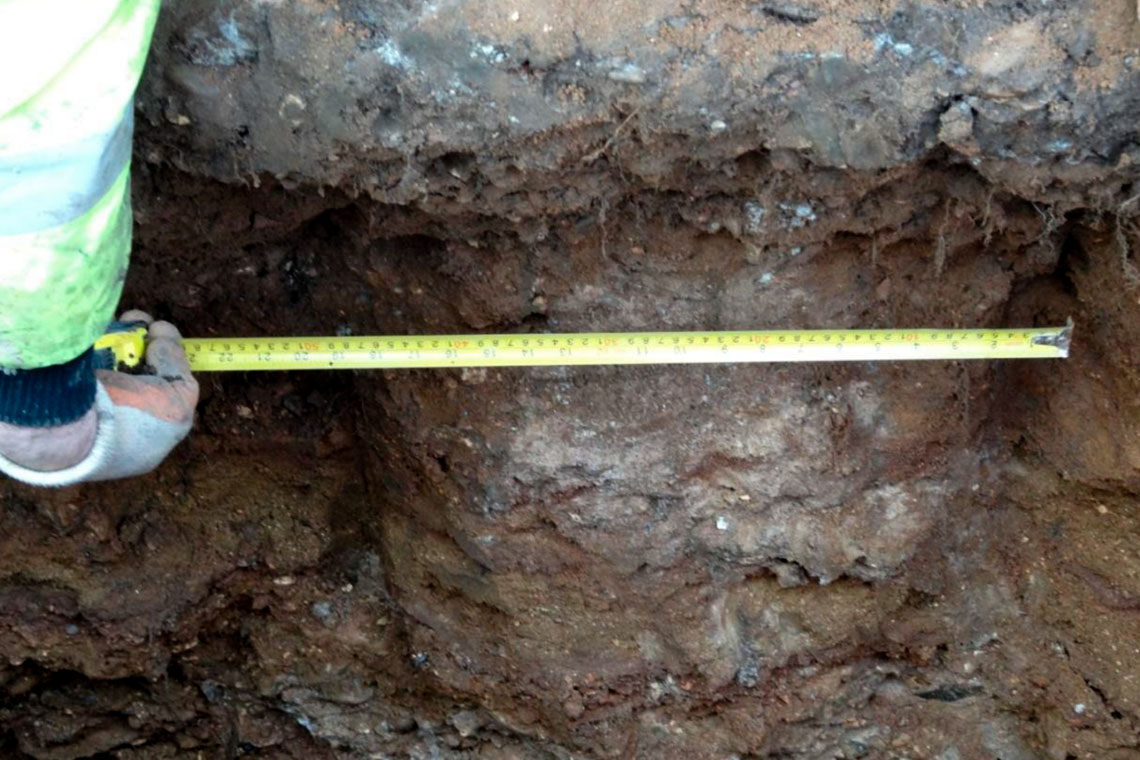 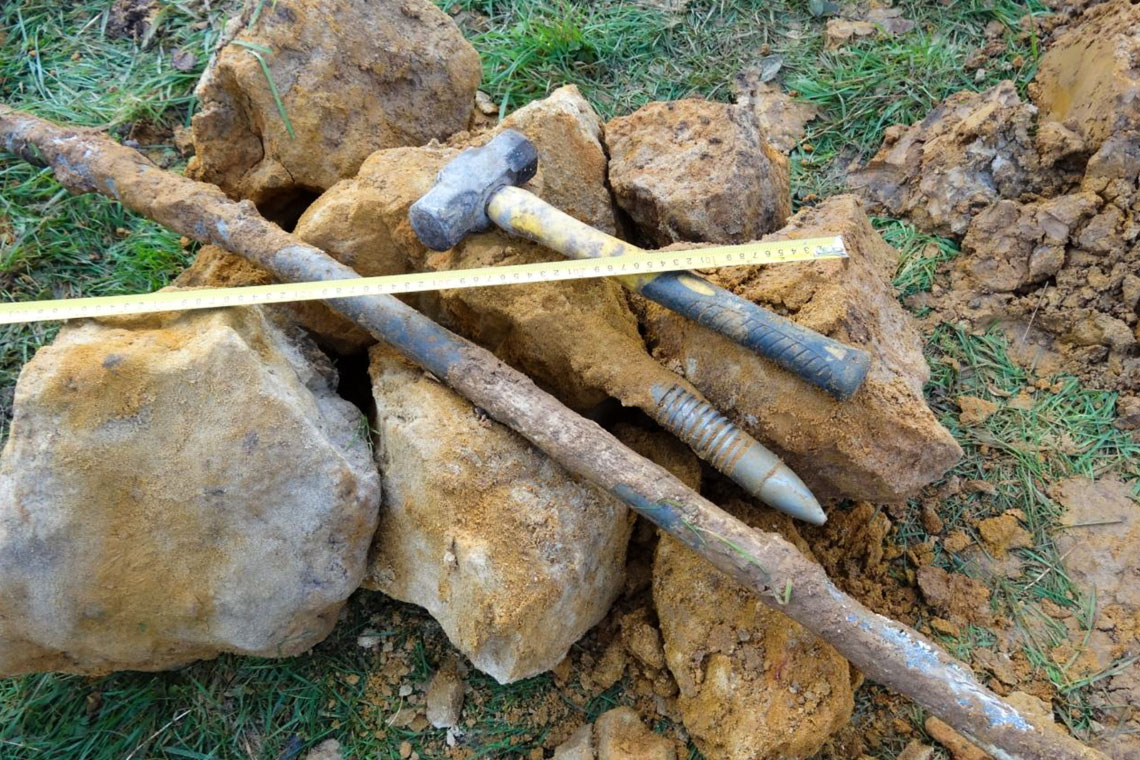 The interaction between the structural lance tubes and the bound soil surrounding them is a crucial part of the system. Geotechnical grade polyurethane grout binds adhesively to the steel lance shaft. Tests have shown that the adhesive bond is such that when failing the bond during tests sand grains, held fast in the polyurethane matrix of the test sample, scored and striated the tube as it was forced through. In loose soil bond failure between the lance and soil occurs at 75kN/m or higher. Tests have shown that paint, mill scale and even mould release oil do not significantly reduce the bond!

With the injected resin set, the lance is made considerably stronger than it needs to be, in fact any section of tube will withstand loads exceeding 150kN.